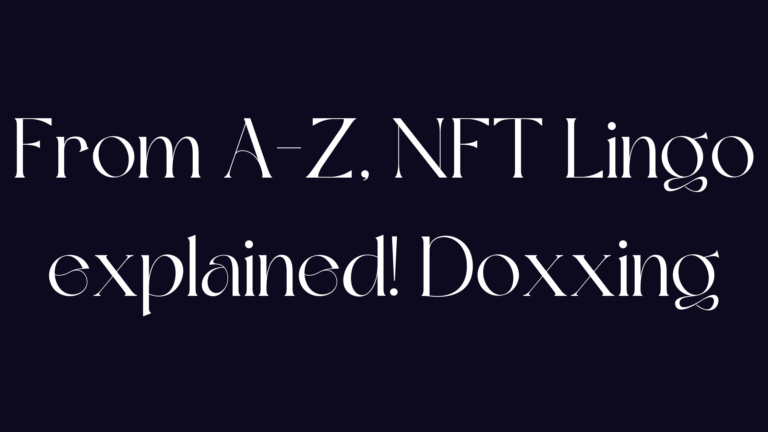 I noticed while exploring this very exciting NFT space, there are many new words to learn and without the knowledge of them, you won’t get very far. It could be a bit confusing and much to see terms like KYC, HODL and more. But those terms are the building blocks to communicate with people digitally and just belong in this world.

In this upcoming blog series on my site I’ll explain in an easy peasy way what every word means and what you can do with it.  In every blog you will find an explanation, handy links and a Youtube link for more information about it. Short, sweet and simple!

You can always have one place to learn about all you need to know when you start, just like me now, to come to and truly understand what every slang word means!

Have you ever seen in someone’s Twitter bio “Doxxed team” and wondered, what exactly do they mean with doxing? Well I know I did and I finally did some research about it.

Let’s begin, as always with the definition of merriam-webster:

informal
: to publicly identify or publish private information about (someone) especially as a form of punishment or revenge …

How does this translate to Crypto and the NFT world?

Well, if you invest in crypto and NFTs we all know very well how much scammers will cross your path trying to make some quick money by stealing your NFTs/wallet and crypto.

By keeping their identity a secret they reduce the chances to become a person of interest for the crooks.

Not only that, though.
Another cause for concern is the rise in physical assaults against cryptocurrency owners.
There are more instances of violent attempts to coerce users into handing over their digital wallet keys, and there have even been accounts of people being tortured alongside their close friends and family.

With all of this in mind, it is simple to expect that as the account grows, unwanted attention will follow.

But some people also choose to have their identity to be publicly known as it signals trust, credibility and shows the face behind the NFTs. It is such a wonderful idea to show yourself also for your community. Because, we all go to the about me page/part on a website when we get to know a new company right? The same goes for in the web3 world. If you choose to do so, please do the needed actions to protect yourself against hackers and scammers because it’s a green light for them to mail or contact you!

First NFT launch coming SOON! Stay updated and follow me on my socials!